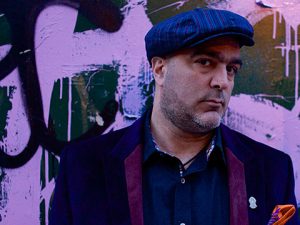 Trumpeter/Producer/Arranger Barry Danielian has for nearly four decades performed with many of the biggest names in the music industry.
Barry’s touring and recording credits read like a who’s who of the music business. Having worked with such diverse artists as Elton John, Barbra Streisand, Tony Bennett, Sting, Tower of Power, Queen Latifah, Eddie Palmieri, Ray Charles, KRS One, Public Enemy, Branford Marsalis, Paul Simon, Blood, Sweat & Tears, Tito Puente, James Taylor, Billy Joel, McCoy Tyner, Illinois Jacquet, Marc Anthony, Ricky Martin, The Roots and Bono.
Since 2012 he has been on tour with Bruce Springsteen and the E Street Band.
Barry has been one of the most in demand trumpeters and arrangers in NYC. He is constantly requested by such legendary producers as: Phil Ramone, Jay-Z, Arif Mardin, Randy Jackson, Barry Eastmond and Narada Michael Walden. He is a prolific writer and producer whose music is used throughout the media industry including NBC, CBS, HBO, Showtime, A&E, The Discovery Channel and Fox. He has two CDs as a solo artist. “Common Ground” released in 2004 received much critical praise and his release “Metaphorically Speaking” has been available since 2013.
Trained from an early age in his first love, jazz, some of Barry’s most memorable performances have been with such greats as Dizzy Gillespie, Benny Golson, Illinois Jacquet, Paquito D’Rivera, and Branford Marsalis. Equally valuable in the evolution of his style were some of his first New York gigs, with Latin music giants Eddie Palmieri and Tito Puente. Starting in 1984, he toured widely with these bands over a number of years and began an impressive series of Latin recordings with such artists as Marc Anthony and Ricky Martin.
Barry has been on the “short list” of legendary R&B artists such as The Temptations, The OJays, The Four Tops, The Spinners, The Dells and The Whispers.
Barry’s mileage on the road increased in 1985 with the first of several tours with rock fusion legends Blood, Sweat and Tears, and
subsequently with Southside Johnny and the Asbury Jukes, Queen Latifah and Jon Bon Jovi. The early 1990s saw Barry on world tours with Latin-pop star Emmanuel where he not only played but held down the duty of Musical director. From 1995-1998 Barry was honored to be part of Tower of Power, perhaps the world’s most famous horn band.
During the mid-1990s, Barry began to realize the reputation he enjoys today as one of New York City’s most in-demand session players and arrangers, racking up more than 300 recordings. His Jingle/TV and motion-picture credits are too numerous to mention.
In 1997, Barry suspended his whirlwind touring schedule to spend more time with his family. As a New York-based freelancer he performs regularly on Broadway and in clubs, while serving on the musical performance faculties at three universities in the New York City area. He still travels both for performances and to give master classes and lectures on brass playing and improvisation for such hosts as Carnegie Mellon University and the International Association of Jazz Educators.
Barry attended the Berklee College of Music from 1980-82, where he graduated with the 1982 Faculty Performance Award. He earned a B.A. in Jazz Performance from William Paterson University. In 1984 he was honored with the University of Notre Dame Collegiate Jazz Competition’s Outstanding Jazz Soloist Award, and in 2000 and 2001 became the only unsigned artist nominated for the Oasis Smooth Jazz Awards.
Barry currently resides in Jersey City, New Jersey, where he spends most of his time composing and producing when not on tour with “The Boss”.